Thursday we spent in Kobe, where we went shopping again, eating, and to an art museum. Shopping in Kobe was an experience. Japanese young people dress VERY trendily for the most part, as I've mentioned before. Therefore some of the stores were a little over the top for me. Some even made me laugh, they were that ridiculous. But there were also some really nice places, and the department stores were way cool. They had everything, and everything was CUTE and clever. I particularly liked the lunch boxes, which had cool little compartments and were just generally cute.

I really enjoyed the art exhibit we went to at the Kobe City Museum, called Prussian Blue. It centered on the use of a particular shade of blue paint and how its arrival in Japan changed Japanese art. It had some beautiful prints and paintings, including works such as this and this by the Japanese master woodblock artist Katsushika Hokusai. Several of the prints came from his series, Thirty-Six Views of Mount Fuji, including those two linked pieces. 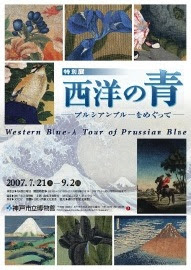