On Sunday, Aki's family had the day off. Aki's mom and brother came and picked us up by car and drove us several hours to take a ferry to the island of Naoshima. The ferry was fun, I haven't been on one in a while. Here's a picture I took from it: 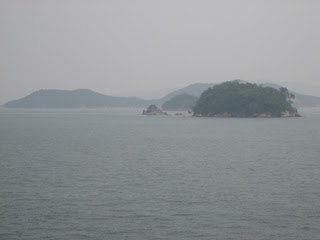 The main attraction of the island is an art museum, the Chichu Art Museum. It features just a few of Claude Monet's famous water lily paintings, but the rest of the museum really focuses on ways to create space and light, and features artists James Turrell, Walter De Maria, and architect Tadao Ando. Unfortunately, we were not allowed to take pictures of the museum, but the museums website has pictures of several pieces, best accessible though this page. It was a truly beautiful and peaceful museum. The Turrell work "Open Field" quite reminded me of Turrell's tunnel at he MFA Houston.

The island also featured these two pumpkins. You could actually go inside the red one. 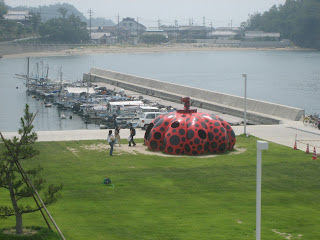 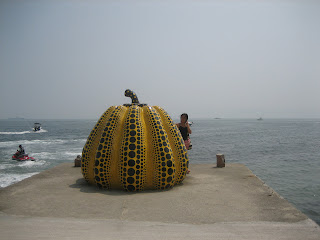 There were also a few other smaller exhibits located inside restored traditional Japanese houses, including a square pool of water built into the floor of one home. Inside the pool, several small screens had numbers on them in red, green, or yellow light. Each counted from 1 to 9 at a different rate. It was interesting. I liked the museum better.

Since it was an island, we also went the beach, but none of us had brought suits, so we just waded a little. It was really hot and humid that day, too, but the museum was air-conditioned, so that made it bearable.

Everyone but Aki's brother, who was driving, slept most of the way back. When we got back to Ashiya, the suburb of Kobe where Aki is from, her mom took us out to dinner to eat unagi, freshwater eel. In Japan, on the Hottest Day of the Year, July 31, it's traditional to eat eel, to give you strength to battle the heat. Actually, we ate it on July 30, but it was plenty hot enough. Plus the next day it actually cooled down. The eel is usually served as a sort of fillet with a sweet soy sauce glaze, with rice. It was quite tasty.

After our unagi, we said goodnight to Aki's mom and headed back to our little apartment for the night, ready for a slightly more relaxed day tomorrow.
Posted by Gabrielle at 10:27 PM