I 💚 Jerry Brown and I 💚 California.

Also, this:
https://www.cbsnews.com/news/the-governor-whos-castigating-the-president-on-climate-change/
Posted by Gabrielle at 10:32 PM No comments:

Well, clearly I have not followed through very strongly on my goals to blog more this year. I tried at first to stay positive, to find common ground. But as things have gotten worse and worse, I gave up on that. Instead, I am trying to just stay up, and not let the world's events get me down. Sometimes that just means staying in a little bubble for a bit. Other times, it means figuring out how to fight back.

Because in 2018, it's time to fight back. On environmental lines, on feminist lines, on economic lines. I'm not sure how music figures in, to be honest. For me, it might mean more chamber music, and being proactive in creating opportunities for myself to make music with friends I enjoy playing with and playing repertoire that I love, instead of just taking what is dished out to me. I think it also means expanding my involvement in the community beyond music, and in civic life. This past week, in which SoCal has been plagued by fire, has been strange. Much of my work has been canceled or postponed. So I finally have enough energy and creative juice to write, but I find myself with too much on my mind to focus on any one thing. So, here are some goals I'd like to set for myself in 2018:

1) Be more environmentally aware: recycle more carefully, use less water, take the car less, and try to find a way to compost.
2) Get involved in the community more: I'd like to go to some neighborhood council meetings, and participate in local events more.
3) Be more active in foiling the current administrations efforts to destroy this democracy: protest more, contact members of congress more, volunteer for organizations like the Giffords Law Center, the Union of Concerned Scientists,  and the Tree People.
4) Keep my country moving forward by speaking up and voting:  about injustices like rampant sexism, unfair tax laws, uneven education, insane housing costs, and environmental injustice.

In the mean time, to help deal with 2017, here is a silly video to keep spirits up.
Posted by Gabrielle at 6:37 PM No comments:

What Does the Fox Say?

This came up on facebook, and it made me laugh just as much as the first time I saw it.

Posted by Gabrielle at 11:36 PM No comments:

"Why is it so important that we all be humiliated, with such ingenuity and at such great expense?  We never thought we were such hot stuff in the first place."
–Kurt Vonnegut
Posted by Gabrielle at 12:58 PM No comments:

Donald Grump has more trash than you

Posted by Gabrielle at 2:02 PM No comments:

Genie: It Ain't Necessarily So....

I meant to post this over the summer, but I forgot. I had been preparing to play Porgy & Bess for the Utah Festival Opera & Musical Theatre when I was suddenly reminded of the Genie's song from Disney's Aladdin (featuring Robin Williams)--in the middle of It Ain't Necessarily So.  Now I am playing an orchestral suite from P&B and I am again reminded of the similarities.  See for yourself if you hear what I hear (mostly in the "ba-da--doo, waaa, waaa!).

I am convincing myself that buying those awesome Ray Ban sunglasses at Nordstrom Rack is also supporting a store after criticism from the commander in chief.
Posted by Gabrielle at 12:43 AM No comments:

I have to say, if you have to report for jury duty, the Santa Monica Courthouse is not a bad place to do it.  Assuming you can dodge serving on a 2-month trial, of course (whew!).  Not a bad lunch break: 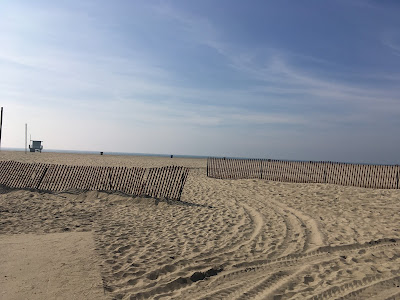 Posted by Gabrielle at 9:55 AM No comments:

While I was unable to participate in a march on Saturday, I was uplifted to see women and supporters of women coming together across the world:

I've felt frustrated for a long time that the women's movement has fallen behind, and that we haven't actually moved forward since I was a child.  Maybe we just needed to wake up. In fact, here is some evidence of that, from a fashion blog (remember, women can care about both fashion AND politics, they are not mutually exclusive!):

(On that note, I was kind of tickled to see that Garance has moved to LA from NYC.)

And also, of course, the Teen Vogue article that everyone's been talking about.

So yeah, let's go ladies!
Posted by Gabrielle at 6:36 PM No comments:

I haven't really been blogging here for a few years now. I found that I was hesitant to post my thoughts about music, as I've worked longer as a freelance musician, for fear those thoughts might have an adverse affect on my work.  Especially since the longer I've worked, the more frustrations I've had.  However, recently I've decided that now it's more important than ever to be open, honest, and stand up for my beliefs. So I've decided to make a concerted effort to blog more frequently, and say what I really think, and communicate thoughts and ideas I'd like to share.

Those thoughts might concern music, or travel, or California, or the environment, as they have in the past. I might talk about politics, though, too. I might talk about more mundane things that nonetheless I've gained an interest in lately, like gardening, cooking, home decor, shopping tricks, or even makeup (third wave feminism, ladies--I don't have to reject traditionally feminine areas of interest if I do it for myself, rather than for other people).  Or books, movies, backpacking, cars, or technology.  I also haven't been writing nearly enough and really I ought to change that (plus it's therapeutic).

Right now, I'd like to process this inauguration. I will start by following the example of a man I think I will always hold in my heart as MY president by trying to take the high ground, find common beliefs, and hope for the best. I just read the text of the inauguration speech, and found some things I can agree with. America has for too long been responsible for policing the world, criticized for getting involved but also for not, so we are damned if we do, damned if we don't. I could see it being a good thing if we let the rest of the world do its own thing for a while while we take care of ourselves. We do need it. In practice I'm not sure how this will work out, but I'm willing to stand back and see what happens.

I am curious also to see what happens when we cut some of the freedoms of trade. I don't think we need all the cheap crap from China we've become accustomed to buying, and we could all do with fewer, better crafted things made by ourselves in our own country. I recently assembled a tool kit for my significant other, and was appalled when I could no longer buy a steel tool box made in America from Sears, of all the most American of brands. I ended up buying a vintage 1980s Craftsman one (just like my dad's) on Craigslist. They literally just don't make them like they used to. I don't know if it's realistic to bring manufacturing jobs back to the US, if those jobs will just be done by robots soon anyway, or if the pollution they cause will do more harm than good. But I like the idea of quality items being manufactured here, and I'm willing to pay a little more for that.

I also like the idea of a regular person without a college degree being able to get and keep a good manufacturing job that enables them to support a family, or at least support a family with the help of a spouse who can also work. More on that later. It's not realistic for everyone to attend college, but these days it seems that's the only way to make a decent life. We need alternatives. And I think if we can be on the cutting edge of technology and environmentally friendly manufacturing, we might be able to support such an alternative.

So that's where I agree: let's stop financing the import of cheap crap from China, let's make and buy better goods here. Let's stop getting involved in other countries' businesses for a while and mind our own, see how it goes. Let's invest in our own infrastructure. And here is where I think I might diverge from the current administration.

Let's include high-speed internet in our public infrastructure so we can keep up with the rest of the world and move to the future. Let's invest in the health of our nation by improving and growing the Affordable Care Act, not gutting it before we have anything to replace it with. Let's invest in the education of our young people by improving our public education system, the failure of which I believe is largely responsible for the election of the current administration. Teach our students to think for themselves, but to read all they can of the world and other people's perspectives, to think critically, to use reason and logic, and as my president quoted, to walk a mile in someone else's shoes. To learn many disciplines, including art and science and music. Only then will we have a population capable of working together to govern themselves.

Let's also invest in our country's incredible natural environment, so that our children's children will still be able to experience the wonders that we can.  Here I think I differ the most from our current administration: if there is a fire on your ship, does it matter now it started? No, all that matters is that everything possible is done to prevent the spread of that fire. Even if someone is skeptical that climate change is caused by human action, it's HAPPENING so let's do everything we can to prevent that fire from spreading. If someone tells you your boat is on fire, and that person is a fireman, you would most likely believe them right away, but at the least you'd check to see if he was right, even if you didn't want him to be. So, the firemen are telling us our boat is on fire. We checked. It's true. Let's put that fire out by any means necessary before it's too late. I'm not concerned for the earth--it will go on without us, and correct problems we've made on its own. I'm concerned for us, and our apparent inability to make logical decisions when faced with clear facts, that could elminate our existence.

There are many other ways I disagree, but I will for the moment think on the ways I agree.  I will not, however, back down from supporting my beliefs and rights with actions.

Some some related reading:

American Apparel rapidly grew its retail footprint. Did that strategy contribute to its collapse?

As Trump pushes for U.S. manufacturing, 'Made in America' is losing its luster in the fashion world

Posted by Gabrielle at 12:11 AM No comments: