Well, in a few short hours, the shuttle will be here to take me to the airport, and I will be off to Japan! So no blogging for now. But hopefully I'll have lots of adventures to report and pictures to post when I get back! And I will have finished Harry Potter and the Deathly Hallows . . .
Posted by Gabrielle at 10:47 PM No comments:

I wanted to express my happiness at Alan Gilbert's appointment to the New York Philharmonic, which looks like it could be a very good thing for the city.

Also, I wanted to point out Yankeediva's blog entry, which I found moving.

Goodnight.
Posted by Gabrielle at 12:04 AM No comments:

Well, the eggplant parmesan is in the oven, so I can relax for a few minutes. I would like to point out Shake It and Bake It's YouTube find, Goshu the Cellist. I found it quite charming, although Goshu's laugh is a little freaky.

A totally random realization: in the car the other day, I heard Bach's Brandenburg 6. The announcer mentioned it's the only one without violins. I never realized this before. If I'd known that, I could have gotten that question on that stupid USC history placement exam about it (I got that wrong TWICE, but now they've scrapped the test, so thankfully it doesn't matter). I also realized it's what Minnesota Public Radio's theme is from. I don't know why, but I thought all of that was very interesting. I wonder if it's every violist's favorite Brandenburg?
Posted by Gabrielle at 11:43 PM No comments:

My trip to the Hollywood Bowl left me cold, literally and figuratively. Although Carolyn did a wonderful job with all those English horn solos, and the orchestra generally sounded fine, I disliked the experience of the bowl itself. For some reason, I thought it would have a lawn area of some sort, like Tanglewood or Ravinia, but it only has the stadium. Unlike those two summer symphony abodes, there is no shed, only the shell over the orchestra. A lot of the seats, including the ones I was sitting in, are ridiculously far away. They have screens that show you close-ups of the orchestra, which is cool, but as far as actually seeing the orchestra, well, I wished I were at Ravinia, spread out comfortably on the lawn with a nice dinner and some wine, free to walk around as I pleased, and to go up to the edge of the shed if I wanted to actually see the orchestra. The biggest problem at the Hollywood Bowl was the amplification. It was uneven. Some instruments you could barely hear (unfortunately, English horn was one), others projected a little too well (clarinets, particularly Eb. Eb barely needs to be miked as it is). And the dynamics were diminished, as they amplified quiet parts extra, and the loud parts they made quieter so as not to blow out the speakers, I suppose. I never noticed this problem at Ravinia. And then there's the issue of getting to the bowl. Driving through Hollywood on a Friday night was difficult, and parking is a nightmare. We parked at a mall parking lot on Hollywood and walked a good distance to the bowl to avoid paying $10 or $15 (or more) for parking, and to avoid jams coming out. Not the $5 round trip Metra fare that brings you directly to the park at Ravinia. I was also miffed since I ended up paying $22 for tickets. They were supposed to be $15, but if you want to buy them ahead of time, you either have to go to the bowl personally, or go through Ticketmaster. And Ticketmaster slams you with all these extra fees. No $10 lawn tickets, and certainly no FREE Ravinia lawn tickets for students, sweetest deal ever. I don't think I will be going back to the bowl anytime soon, unless it for something like this (found via oboeinsight). I wanted to go to this concert, but I was away. To hear the Decemberists combined with an orchestra would be awesome, and I think the bowl is a better setting for that type of concert than for a standard symphony program. I enjoyed this as well. And oddly enough, I think the writer of that blog entry might have gone to my high school. I know her sister did, and I've met her parents before. And I sang with her cousin in the children's chorus of HGO's Mefistofele when I was in high school. What an odd connection. Anyway, Ravinia over Hollywood Bowl ANY DAY.
Posted by Gabrielle at 12:35 PM No comments:

i must be hungry, this post mentions food a lot

Well, I'm back! Stephanie's wedding was lovely (omg I can't believe my friends are starting to get married eeeek). I so enjoyed being back in both Evanston and Chicago and seeing a few old friends, it was delicious. As was the Chicago-style pizza at Giordano's :) And the Unicorn at the Unicorn (coffee, chocolate, and ice cream--you can't go wrong with that combo!). It was great to be able to walk, which I did, a lot. People look at you funny if you walk in LA, and the city isn't laid out for it. Plus I didn't have to drive for a whole week, yay! I did spend 12 hours in the car Chicago to Columbus and back, but I didn't have to drive (thanks, Michelle). Too bad I missed any Ravinia concerts. It was a bit hot, but what's summer without a good heat wave? Plus it rained, and since I have't seen rain in months (since I went to Houston), I was actually happy to get caught in a rainstorm!

Back in LA, my next adventure will be my first trip to the Hollywood Bowl tonight for an English horn extravaganza: Roman Carnival, Ravel Piano Concerto, and Pines of Rome all on one concert (yikes!!!) And I'm going to enjoy being back in LA by eating sushi. Now I just have to try and focus for a few weeks before I leave for JAPAN (where I can get even BETTER sushi)!

Meanwhile, here is a turtle in the marina on Lake Michigan: 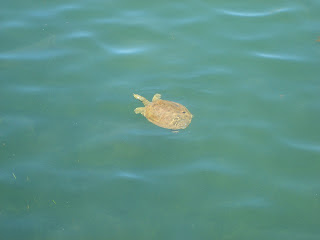 I'm off to Chicago/Ohio for my friend's wedding and a few days to see people in/ enjoy Chicago/Evanston. Don't know about computers during my trip, so this will probably be it til I return in a week.

I noticed this piece in Sunday's New York Times Magazine. I thought Mr. Cohen's perspective was interesting, but I disagree. While performing in church does help people to worship, it is a performance. A prayer should never be a performance. Musicians are hired to perform in church, not to pray. Therefore I don't think that the choir should be required to speak the prayers. I wonder how he would apply these rules to instrumentalists?
Posted by Gabrielle at 12:23 PM No comments:

Beverly Sills.
Posted by Gabrielle at 9:24 PM No comments:

"In that way the trap was sprung: beyond the edge of the crater the air vibrated continuously, or rather, it vibrated continuously but in a way that involved different discontinuous vibrations. It was a sound that rose to fullness, faded, swelled again, and this modulation was part of an invisible pattern it followed, extended across time like a chequer of solids and spaces. Further vibrations were superimposed on these, and they were shrill and sharply separate, yet drew together in a halo, first sweet, then bitter, and as they contrasted or followed the movement of the deeper sound, they imposed a sort of circle or field or dominion of sound."
from "The Other Eurydice," in Numbers in the Dark,
by Italo Calvino, translated by Tim Parks
Posted by Gabrielle at 8:31 PM No comments: