Argh, I wish my life were more balanced. It seems that these days, I either have a billion things going on or NOTHING. And oddly enough, NOTHING can make me more anxious than EVERYTHING. Well, it's not that I have absolutely nothing. I performed Berio's "ricorrenze" this Tuesday evening with my quintet, I had a lesson yesterday with a particularly wonderful member of the Los Angeles Philharmonic, and I have an audition on Monday and church gig on Sunday. But I haven't had orchestra rehearsal, which is what my life usually revolves around. My time has been completely unstructured, which is great once in a while, but it's difficult to stay focused and motivated with no routine or schedule. I only have one student since the other has opted out of lessons for a while, and he wasn't home for his lesson on Wednesday. I've been at home a lot, which is nice because I haven't had to drive, but I get cabin fever. I'm bored of running, and I want a bike. I tried to go out and get one today, but the local Sears doesn't have them, and the bike store only had super fancy ones. I just want something simple to ride to the beach. And my mother doesn't want me to get one because she knows lots of people who've been in bike accidents. I try to reassure her that the ride to the beach is on a smaller road with a bike lane, but I'm sure she's picturing me driving on the 10 or something. Anyway, I'm restless and this extra time has just allowed me to start thinking about the summer and next year and the rest of my life and start to FREAK OUT!!!! Oh well, soon this little empty time will be over and I'll have rotation in school and Debut and AYS and a recital and I'll be longing for a break, but right now, I just wish things were a little more even. Better go practice.
Posted by Gabrielle at 3:22 PM No comments:

I watched the 80th Academy Awards today! Fun times. I like Jon Stewart. I was really glad No Country for Old Men won. I love DDL, but I saw both Eastern Promises (an excellent movie!) and There Will Be Blood (a good movie, but not my taste), and I honestly preferred Viggo Mortensen's performance. But whatevs. And I think Amy Ryan was really awesome in Gone Baby Gone, but I didn't see Michael Clayton, so I can't judge her against Tilda Swinton (she kind of looks like she's from outer space, no?). Owen Wilson was not his usual happy-go-lucky, silly self, and that made me sad. I was glad "Falling Slowly" won for the song, and I think that Glen Hansard is kind of a jerk (there's lots more people to thank, but you know who you are, so I don't need to say your names?? when else are you going to recognize someone's help to your big win but at the AWARDS show?? among other reasons), so I found it amusing that Jon Stewart called him arrogant. I'm glad he brought Marketa Irglova back to say her thanks. She's born in 1988? She's only 19?? Yikes. Hmm that would also make Glen 18 years older? Is that right? I'm bad at math. Anyway. Lots of pretty people and gorgeous dresses. Kind of funny to think that I watched on TV only about a mile from the actual event.

There always seem to be lots of articles about how ridiculous the Oscars are and that they don't actually reward the best movies. Well, it's Hollywood! What do you want? Just enjoy the show, that's what I do. And a lot of those recognized are really excellent movies, performances, achievements, etc.

I also decided that I wish I could be a cinematographer, though it sort of seems like the kind of thing you either have a talent for or don't, rather than something you can really learn. I mean you can learn how to do it and the theory behind it, I'm sure, but when it comes down to it, you really need to just have an eye for it. Anyway, I love my one foray into total pop culture for the year :)

PS I was glad Dario Marianelli won for best score for Atonement. It was a good score, and I've liked his work before.
Posted by Gabrielle at 12:12 AM No comments:

The best comic ever.

My roommate's mom pointed this one out to me. It's particularly wonderful since my roommate plays cello :) I've even had a discussion with people about the possibility of "oboe hero," but this is even better. So thanks again, Jan!
Posted by Gabrielle at 8:42 PM No comments:

I didn't really celebrate Valentine's Day the way you're supposed to today, but that's OK by me. I did get to hear Allan play Bach, though, which is always a treat.
Posted by Gabrielle at 12:17 AM No comments:

And that's good enough for me.
Posted by Gabrielle at 9:22 PM No comments:

Movies I have enjoyed recently:

A History of Violence

it is true to its title, but I enjoyed it nevertheless.

The Wind That Shakes the Barley

a very moving story about the Irish War of Independence and the Irish Civil War.

it left me in tears.
Posted by Gabrielle at 2:11 PM No comments:

I just read an interesting article in New York Times. Personally, while I myself am distracted by overly theatrical performances, I have found that non-musicians actually react positively to this sort of behavior. Think of rock stars and their antics--no young person who goes to rock shows is going to be bothered by any of the much milder aerobic activity displayed by classical musicians. And I think that vision need not impede a concert experience--on the contrary, I think it is an essential part of what makes a live performance so exciting and personal. I even think it can help one listen better. For example, if I hear the strain of a particular melody on an instrument, and I think it's the oboe, I look at the oboe, and I can see that the oboist is indeed playing that melody, and then somehow I hear it better, or I can isolate it from the rest of the notes more easily. I think it's fascinating to watch people perform. I do agree with Mr. Holland, however, when he says that these histrionic performers use their onstage behavior to market themselves, which I find objectionable.
Posted by Gabrielle at 6:37 PM No comments:

I voted today! I was going to take a picture of my "I voted" sticker, but it fell off somewhere on the way home :( So here is my ballot stub instead. 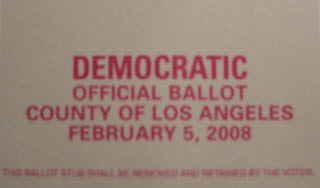 Posted by Gabrielle at 9:40 AM No comments:

Last night a friend of mine from college (she got her masters at NU when I was 3rd-4th year there, and we were in a chamber group together at some point) posted pictures of her brand new baby girl on facebook. I am in awe. She is so tiny and beautiful! The idea that someone I actually know and is close to my age (she's only 2 years older) has her life together enough to have a BABY is kind of mind boggling. It just seems so, I don't know, grown-up? There's no way I would be together enough to have a family of my own in two years, that's for sure. Anyway, congrats to Sarah and Mike on the arrival of baby Carys!
Posted by Gabrielle at 9:46 AM No comments: