My last day in Japan was spent primarily in Nara, another important ancient city. There is a really huge temple there, and a beautiful ancient forest, and deer. Lots of deer. The first place we went was a sort of collection of shrines in the forest. There was a main pathway to this place, lined with stone lanterns and guarded by lions (as always with shrine guards, one open-mouthed, the other closed). 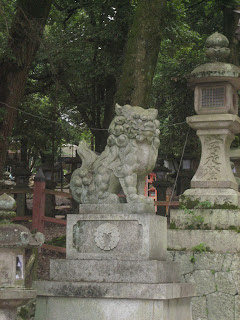 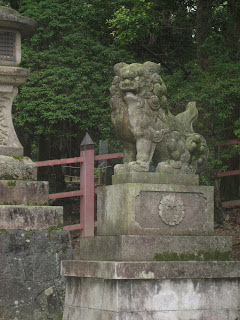 We continued to walk on a path through a beautiful forest, where we passed some interesting shrines. One contained quite a lot of sake for the gods. They must alcoholics, these gods. Or maybe they're musicians. We also passed a shrine for womens health, which I found rather odd. Either women had unhealthy breasts, or the illness was located somewhere else on the body, but not the head. At least, according to the posts at th shrine. It was rather surprising to come across! 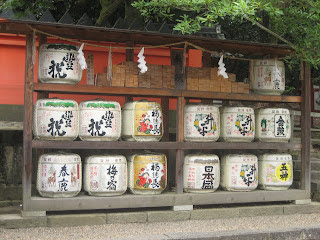 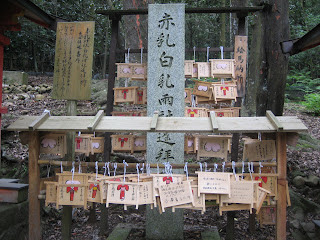 The forest in Nara had a lot of really beautiful, old trees, and one temple even had a tree growing out of it: 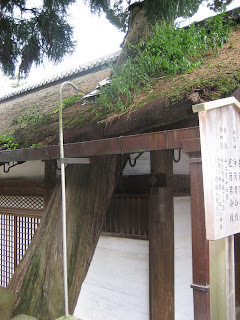 We also encountered some very interesting signage on our sojourn through the forest. Nara, as I mentioned, is full of deer. Apparently, the deity to whom one of the temples is devoted to arrived in town in style on a deer, thus the deer were treated as sacred animals in the city. They're everywhere, and they're tame, or at least not afraid of humans, whom they now see as a food source. You can buy food to feed the deer. However, they are still wild animals, so there are a few signs up warning: A) Don't get between a mom and baby deer. Though baby is just curious, mom will become anxious and upset (I'm interpreting this from the pictures, not from the Japanese on the sign that I couldn't read). B) Don't get between boy and girl deers at a certain time of year . . . this will seriously piss them off. 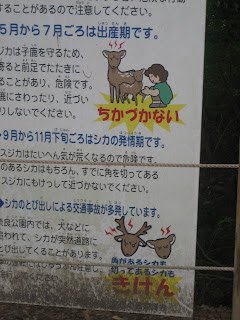 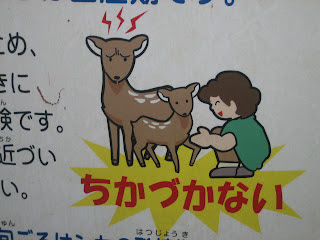 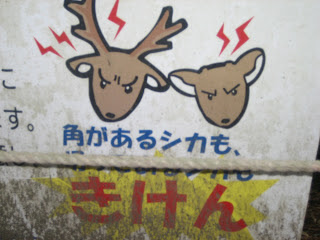 When I actually did come across deer, they seemed rather sweet. Especially the fawns. Awwww. (Those ferns must have been tasty . . .) 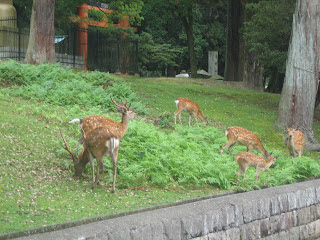 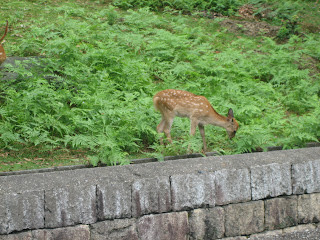 After seeing the forest and the various shrines there, we had some lunch at a place where they serve a special kind of rice dish. They steam the rice with vegetables and various meat or seafood of your choice. The rice takes on the flavor of the things it's cooked with, and it's served in the same container that it was steamed in. The rice that sticks to the side and bottom of the container gets slightly crispy and extra flavorful, and is therefore considered a treat.

After lunch, we headed to the huge temple, Todai-ji, supposedly the largest wooden structure in the world. The entrance is guarded by two huge figures (open-mouthed and close-mouthed). Inside, there is an enormous Buddha, and several other very large religious statues. It was quite impressive. 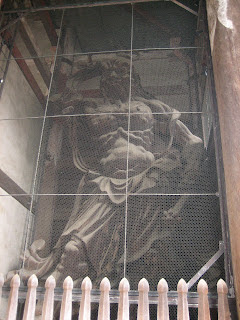 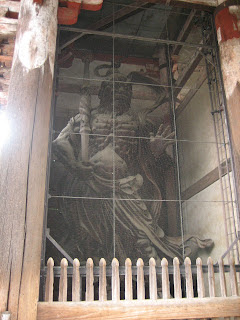 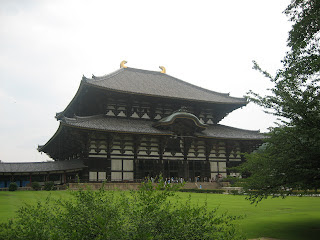 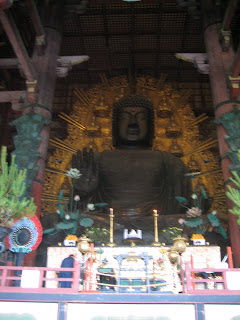 It was awe-inspring, actually. As was the gargantuan bell outside the shrine. I wish I could have heard it being rung. 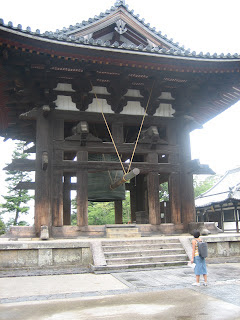 After the shrines, Aki and I had some of those special thick green tea drinks and dessert. I had this gel stuff made of special plant with ground beans on top. It sounds weird, and to be honest, it looked really weird, too, but it was actually quite tasty, in an almost peanut-buttery sort of way. I love peanut butter. How American of me.

Tired from our trek through Nara, we took the train home and I packed my bags for my flight home.
Posted by Gabrielle at 11:43 PM