On the second day, Aki took me to Himeji castle, near Kyoto. It was a boiling hot day with incredible humidity, which dampened (literally) our enthusiasm somewhat, but we set out bright and early anyway. Himeji castle was built by wealthy feudal lords and completed in 1618. It features, among other things, a mote, a room for beheading, and slots for pouring boiling oil down the wall at intruders. Here is the progressive view of the castle, as we got closer and closer to it: 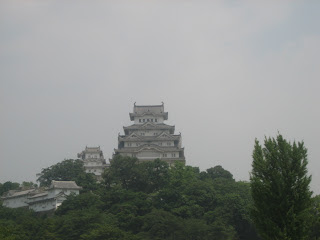 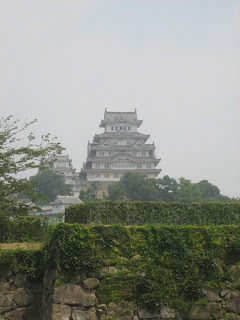 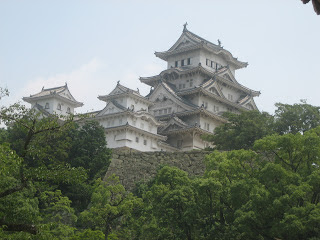 The castle was made mostly of piers and beams, similar to Kyomizu. It had an impressive wall and front gate. It also had a tile roof, and at the end of each of the beams supporting the roof, there were decorative tiles, with symbols representing different family clans. There were also fishies on the roof, and lovely views: 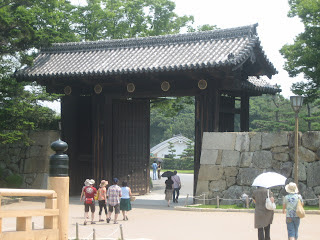 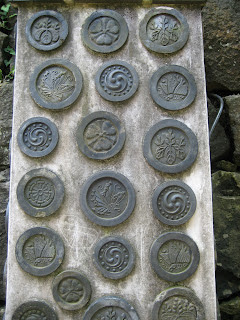 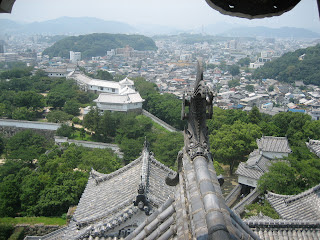 After climbing up to the highest level of the castle, Aki and I were getting tired and hungry, so we ate at a restaurant near the entrance of the castle, where I had cold udon noodles. I've never had them cold before, but it was so hot that anything cold sounded delicious. They were pretty tasty!

After Himeji, we headed to Kobe to do some shopping. Well, maybe not actually shop, but look at stores, anyway. There were a lot of young women in Japan dressed to the nines, with elaborately-styled caramel-dyed hair, short skirts, long nails (sometimes with little rhinestones or flowery designs on them), full make-up, killer high heels, and ALWAYS clutching a designer handbag. Many stores for young people reflected these fashions, but there were some I liked. One store had an excellent selection of Camper shoes, and Aki introduced me to her favorite brand, Sybilla, which I also liked.

A few stores sold almost everything imaginable, Japanese-style. They have great lunch boxes there, lots of cell phone decorations, and pretty much everything is cute or pretty. What was most abundant, however, were handkerchiefs. Many public restrooms in Japan, while they might include toilet rim sanitizer and bidets, do no include paper towels. Nearly all Japanese people seem to carry little washcloths or handkerchiefs around, not to blow their noses, but to dry their hands or wipe their brows. Almost all stores had full selections of these handy little things, including designer labels (you could get one in Burberry plaid, for example). I found this very intriguing.

I regret not buying glasses in Kobe. Aki has several pairs of excellent glasses, and the designs available were great. More importantly, you could buy a frame and lenses for around $30. Oh well, maybe next time! No Japanese pants would have fit me, I think--most Japanese people are really skinny, and rather lacking in Sir Mixalot's opinion. I did feel that I fit in being short, however. It was nice to feel average for a change. It was odd, however, to be so obviously a foreigner. In most of my other travels, I've been able to blend in somewhat, but not in Japan. Sometimes little kids would stare at me.

Well, I am going to try to calm myself down some more. In the middle of writing this entry, I experienced my first earthquake ever. It scared the hell out of me, even if it wasn't big. Now I am a real Californian. Well, maybe.
Posted by Gabrielle at 12:21 AM