On Monday, we went to Arashiyama, probably my favorite place on the trip, perhaps in part because it was also the least crowded. We also took a more leisurely pace here. The main attraction for us in Arashiyama was the majestic bamboo forest, but we found plenty of other things to distract us.

Since we got a later start that day, by the time we arrived in Arashiyama, we were hungry. So we got food in a Japanese convenience store. The food you find in a Japanese convenience store (such as Lawson, or or even 7-11) is very different from what you would find in an American convenience store. They have sushi as well as full meals in a little box that they will even heat for you. There are always rice balls (well, more like 3-dimensional rounded triangles of rice covered in seaweed), as well as pork and fish breaded and fried. It's not as good as a restaurant, but it's not bad, either! Plus they have all sorts of fun snacks and drinks, including Boss, some coffee drink that features Tommy Lee Jones' face on it (rather like Bill Murray in Lost in Translation).

So on our way to the bamboo forest, we passed a collection of shrines in temples that we walk through briefly, only looking at the free ones (entrance is usually only $3-5 but if you go to 5 0r 10 in a day, it really adds up). I particularly liked these statues by the road, and I also took a picture of a cicada, simply because when I think of Japan, I think of the sound of cicadas--they are everywhere, and they are SUPER loud. The little drunken raccoon statues were everywhere, and Aki couldn't really explain what they were about, but I took a picture one, anyway. 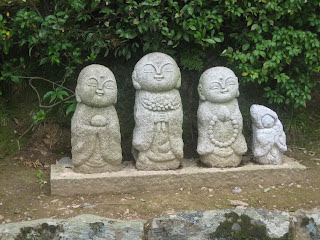 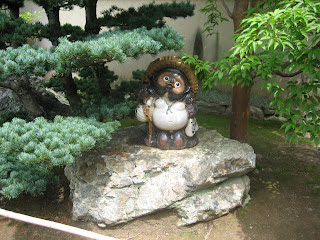 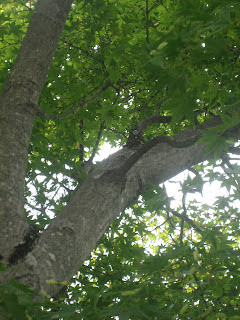 After passing through the group of temples, we walked on until we came to the entrance to the forest. It was truly beautiful there, and very peaceful. The bamboo made a really cool noise when the wind ran through it, almost percussive. 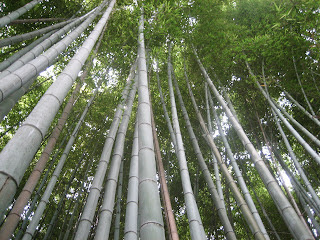 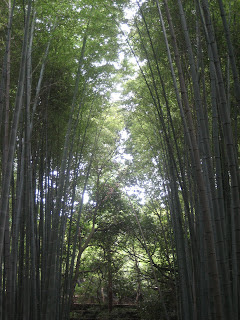 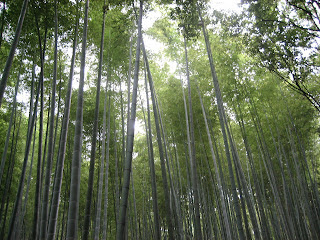 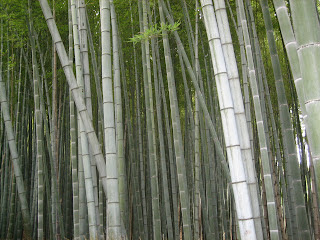 In the bamboo forest, there were a few more temples, including two that I really loved. They were both very quiet and mossy and had beautiful streams in them. The first was Joujjakoji. 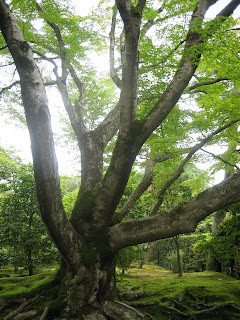 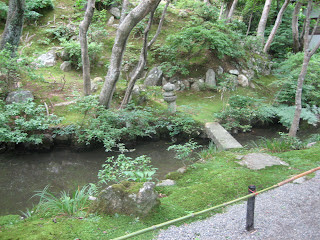 After pausing at this peaceful pond, we came to the home of a a famous Japanese haiku poet, Mukai Kyorai. He lived in this place, Rakushisha, in the late 17th century. Apparently, Kyorai had a large number of persimmon trees there (several still exist), and one autumn the trees were particularly fruitful. He waited until they were ripe, and was planning on picking them and selling them. But a big storm hit one evening, and none were left on the trees by the next morning. Thus Rakushisha is the "cottage of the fallen persimmons." People still come here to write haikus.

Next we came to a small temple hidden in the forest. It was called Ghi-Ohji, and I remember that in the temple, a little white cat sat and faced the garden. 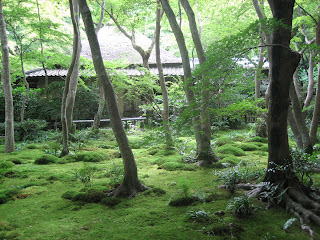 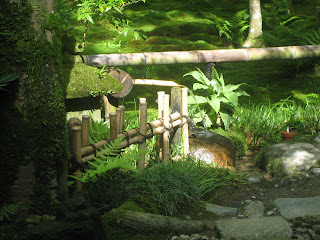 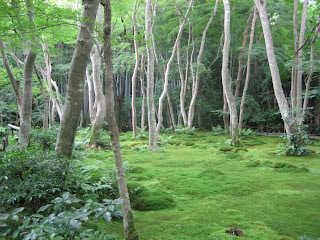 After leaving the seclusion of this temple, we pass by a rice field, and then went into a tea house, where I enjoyed vanilla ice cream with green tea powder (the nice man gave me extra) and Aki let me try one of her favorites, a kind of thick green tea with froth on top. It usually comes with a little treat. It was tasty. 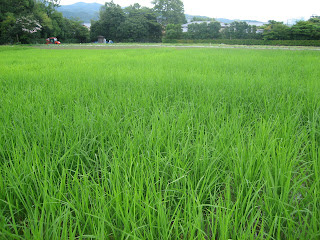 The man in the cafe had suggested we go to a particular temple, Otagi Nenbutsu-ji, which had over 1,000 little stone statues of people worshipping. 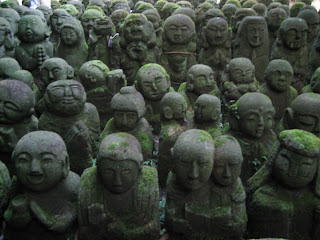 This was our last temple in Arashiyama. We headed back toward Kobe, stopping in Kyoto at the Shimogamo festival (at the shrine). I'm not sure exactly what it was for, but there were lots of people, especially children, and the Japanese version of carnival food. Many people wore traditional Japanese attire, which I thought was cool. Aki had me try a large wafer thing with a sauce dripped on it and then seaweed and other goodies sprinkled on it. That was pretty good, but I refused to eat the part with mayonnaise drizzled on it. There was also a sort of pancakey thing with all sort of sauces and cheese wrapped in it and put on a stick, which was very rich and difficult to eat, since it kept falling apart. I guess it had a lot in common with American carnival food. For desert, we had a frozen, chocolate-covered banana. Pretty good, actually. And that was it for the day. We headed back home for the evening, preparing for another busy day (and early start) in Kyoto.

Posted by Gabrielle at 1:24 PM