Kyoto has hundreds of shrines and temples, and Aki seemed determined to show me all of them. First, we went to Sanjusangen-do, a temple housing 1001 golden statues of the Buddhist deity, Kannon. In addition to those, there were statues of a few other deities, including the thunder god and the wind god. The temple was built in 1266, which I found rather awe-inducing. I couldn't photograph the inside, but here is the outside and a picture of a postcard from the inside: 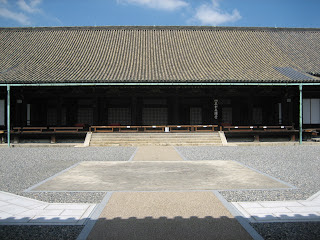 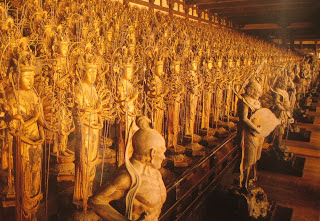 There are 1000 human-sized Kannons, and one really big one. They were very impressive. To visit the temple, one must remove one's shoes. Incense is usually burning, and often priests will be praying.

Next, Aki took me to Kyomizu, a temple built on a steep incline with lovely views of Kyoto. 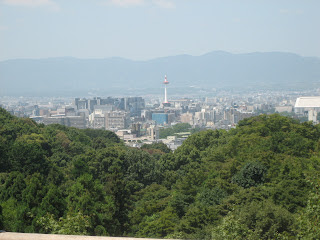 Though large, Kyomizu is built without using nails, rather like an extremely sophisticated log cabin (hey, I read my Laura Ingalls Wilder, I can't help it). There are a number of shrines near the temple. It was a bit of a hike up on that hot day, but it was worth it. Here is the entrance to the temple and the temple itself: 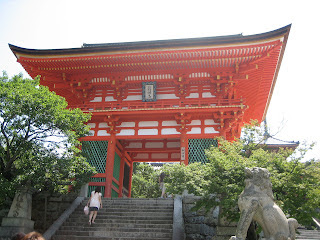 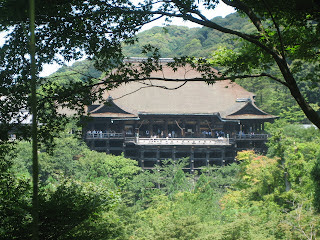 The temple takes its name from a waterfall that flows nearby. At Japanese shrines, people ritually wash off each of their hands and their mouth before praying at the shrine, where people clap twice, bow their head with eyes closed, silently repeat their name and address followed by a prayer, then clap again. There are fountains at every shrine. At Kyomizu, the fountain that supplies the water for this purpose comes from that mountain stream: 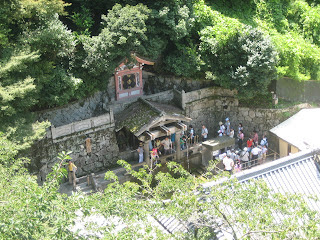 Adjacent to the temple are several shrines, including the Jishu shrine, a shrine for love. Outside of that shrine, there are two large stones imbedded in the ground, about fifty feet apart. If a person can walk from one stone to the other with their eyes closed, they will find true love. Or they can have their significant other help them. I didn't try it.

After Kyomizu, we looked through some of the tourist shops nearby, which were actually quite nice, with beautiful fans, handkerchiefs (very popular in Japan--more on that later), incense, and other odds and ends. There were also a few restaurants, and we stopped at one for lunch. This restaurant served a particular meal focusing on red bean: red bean tofu, red beans with rice (not like Mexican food at all! different red beans and different rice), sweet red beans, plus fermented soy beans wrapped in seaweed and fried, regular tofu, and miso soup. It was interesting. I liked most of it, but the fermented soybean things weren't my favorite. For dessert, they give you three little marshmellow-like things on a stick, with a sweet, sticky sauce on it, and dried red beans. The dried red beans are to be ground into powder using a stone mill that sits on the table. The powder goes on top of the marshmellow things. It was quite tasty, and fun to do, too!

After lunch, we headed to a different part of town, to another temple, Chionin: 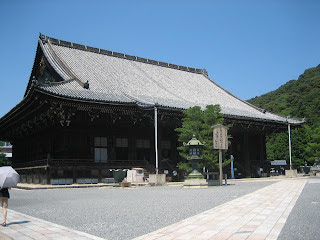 Here I was able to observe monks in a service honoring a family's ancestors, which was really cool. They chant prayers and also use beautiful bells and drums. One of the two monks seemed to have a difficult time with the name of the family, Kobayashi (about the only word I could actually catch), which was kind of funny.


Next we went to Heian Jingu. This temple's most impressive part was its large garden. It had lovely flowers and water-lilies: 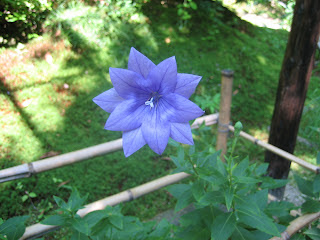 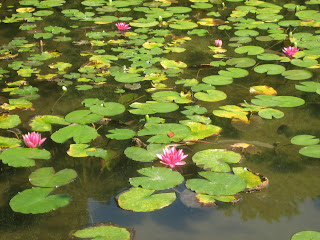 There was also wildlife, including a heron and a turtle: 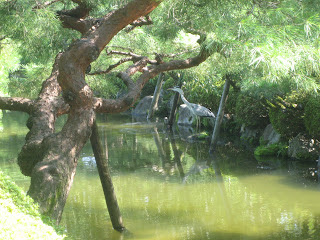 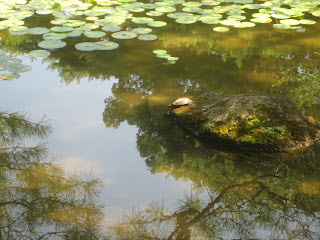 This was one of the bigger gardens we went to, with a large bridge where they had vending machines selling food to feed the turtles and carp in the lake. Many of the fish and turtles swam over the the bridge when they saw people. The carp kind of freaked me out a bit, to be honest. Those big, gaping mouths . . .

Finally, we headed to what would be my favorite temple of the day, and one of my favorite places the whole trip, Ginkaku. This temple had a simple building, but an interesting sand sculpture and a beautiful mossy garden. Moss is cultivated and highly prized at Japanese temples and shrines, and I found it really beautiful. Visitors are not allowed to touch it, but I really wanted to stretch out on it, it looked so soft and inviting! Actually, at Ginkaku, I found it rather amusing, because they had a display showing all the different types of moss grown in the garden, separating them into three groups: OK Moss, Good Moss, and Very Important Moss (VIP Moss!!!). Here are the sand sculpture and the VIP Moss: 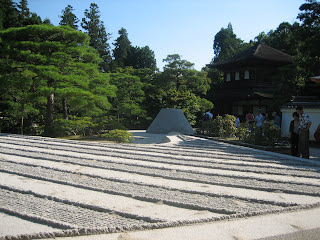 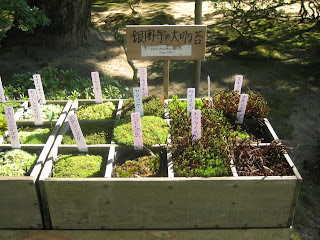 The garden itself was gorgeous: 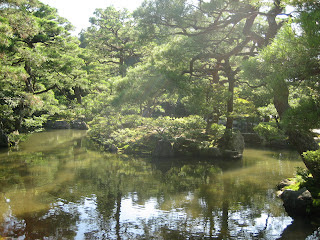 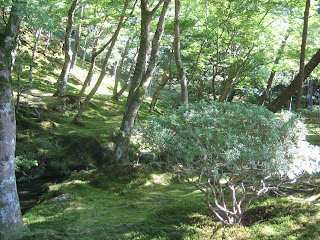 One last waterfall, after which Aki and I returned to her apartment, where we had a quick dinner and I conked out at about 9pm, completely exhausted. 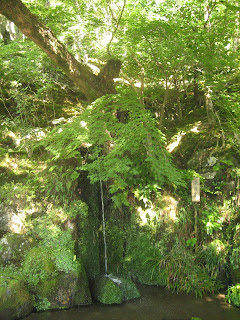