I got to DC late on Wednesday evening, and had some dinner near my friend Georgina's apartment in the Dupont Circle area, then crashed.  Thursday morning we went for a lovely run at a park past Dupont Circle and over a creek, Rock Creek Park.  Georgina had to go to work after that, but I then made my way to Alexandria, Virginia, to meet my friend Stephanie, a singer (and now mom) from Northwestern.  We had a yummy lunch in Old Town (though Walter was a little fussy as his mom had gotten a stomach bug a few days back and his schedule had gotten off), where I had a pretty delicious crab cake sandwich.  We walked around a bit, but of course I forgot to take pictures.  Once we'd gotten Walter to fall asleep, we drove around a bit and picked up Stephanie's husband Jon, who works at the US Patent office ("killing people's dreams").  The patent office has a really cool building, though.  We drove down the George Washington Expressway to Mount Vernon, and then back to Alexandria, where we made a stop at the George Washington Masonic Memorial before I went back on the train.

When I got back to DC, I met up with Georgina and we decided to hit up the cherry blossoms immediately, because it was supposed to rain that night and we were afraid the blossoms might get obliterated. I'm glad we went, because although the rain did not obliterate the blossoms, they were truly at their peak on Thursday and it was magical.  Here are a few photos. 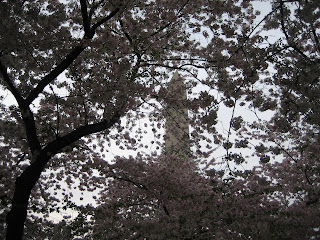 Washington Monument through the blossoms 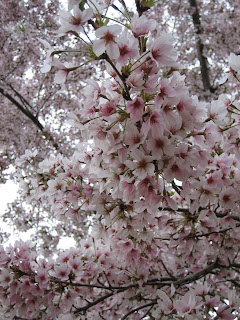 Closeup of the blossoms 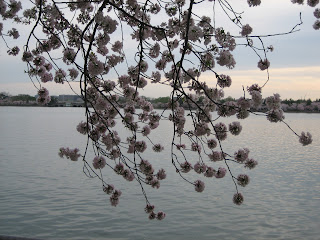 Blossoms over the tidal basin 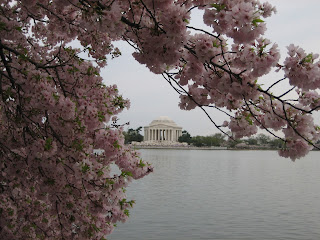 Jefferson Memorial through the blossoms 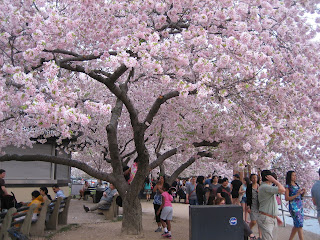 Scene at the festival 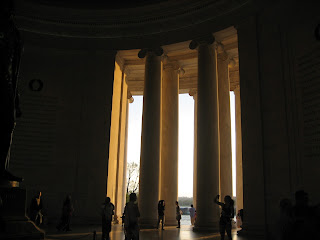 View from inside the Jefferson Memorial 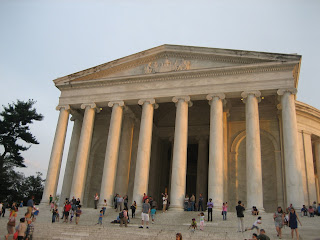 
After our sojourn through the blossoms, we headed to the Nationals Games (versus the White Sox), where we ate chili dog and fries and enjoyed the game until we got so cold we had to get hot chocolate and fried dough to warm up.  We considered buying a Nationals sweatshirt, but the only ones we could find were $100 (!).  We left at the 7th-inning stretch because we were just too cold (even though it had been uncomfortably warm most of the day!).  But that's OK, because the Nationals still won.

Posted by Gabrielle at 6:48 PM