Tuesday morning I was on my own to explore Paris.  My first destination was the Rodin Museum, walking distance from Dawn's apartment.  But first, I must be brave, and order myself a cafe, in French, and figure out how much it cost and use the right amount of currency.  It was scary, and my French is terrible (the only way I can do a French "R" is by extremely over-pronouncing it in a Monty Python-esque manner), but I did it!  Successfully caffeinated, I continued on to the Rodin Museum, and my next adventure in French.  Contrary to what I'd heard, I found that Parisians didn't mind if you horribly butchered their language, as long as you gave it some effort (what they did mind, and I don't blame them, is if you just spoke in English to them as if you assumed they would understand).  So once again mangling my French horribly, I asked the lovely young lady at the counter for my ticket to the museum.  She then asked if I was a student, to which I replied, no, but I am a teacher.  What kind of teacher? Art?  No, music.  Close enough!  Free tickets for art teachers in France :)  After showing her my Crossroads ID (which conveniently states "Crossroads School for the Arts and Sciences" on it), I received my free ticket, and happily entered the museum.

It was a lovely place to spend a beautiful fall morning in Paris, which bright sun, mild temperatures, and a nice breeze.  One of the nicest parts of the museum is its garden, which includes "The Thinker," among many other famous Rodin sculptures.  It also has an indoor collection of marbles (inlcuding "The Kiss") and a houseful of artwork related to Rodin and his contemporaries.  When I went to go into the house part from the gardens, I realized I managed to drop my ticket somewhere in the garden.  I hurried back into the main entrance just catching my friend from before, who was about to leave.  She remembered me an issued me a new ticket, no problem.  I was embarrassed but grateful. 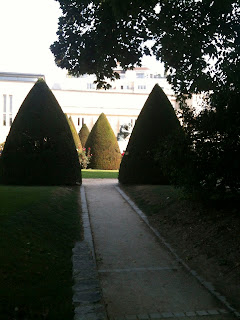 After the Rodin Museum, I met up with Arthur, who had kindly offered to show me around Paris on his day off, for lunch.  I had a croque-monsieur sandwich at a cafe near the Opera stop.  From Opera, we did a bunch of walking, including the Champs Elysee (which I wondered why its spelled "champs" but pronounced "chans") and the Arc de Triomphe.  The Champs Elysees, though beautiful, was a bit disappointing.  It was almost like a giant American mall but on a beautiful Parisian street.  There were mostly chain stores that could be found anywhere, and restaurants that were unreasonably expensive for what they were offering.  We went into the flagship Louis Vuitton, which seemed a little bit more Parisian to me than, say, the Gap. It was a gorgeous store with beautiful merchandise, but it's not like I could actually buy anything there.

The Arc de Triomphe, however, was pretty great.  I was tempted to buy tickets to go up, but in the end opted not to. It is ornately carved, including the ceiling. 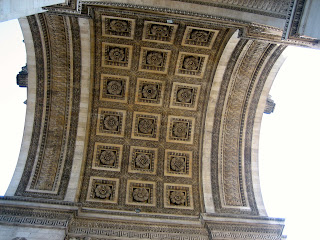 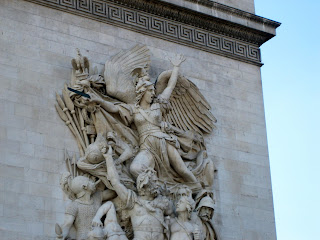 And this one, possibly of a shawm-playing angel: 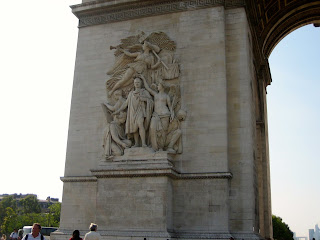 After the Champs Elysees, we headed over to the Etienne Marcel metro stop to meet Dawn after her workday, and another co-worker, Yann.  I was excited to find this mural: 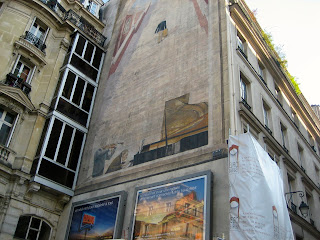 We partook of some pastries in this neighborhood, and then wandered around for a while, enjoying the evening and window shopping, in typical Parisian fashion, before heading home.  We had a nice crepe dinner at a charming little restaurant near Dawn's apartment.
Posted by Gabrielle at 10:00 AM