I'm totally exhausted from another hike with Jenny. We left at 7:30 this morning to go to a trail in Altadena, a big deal for me since I am NOT a morning person. Although we set out on the wrong trail at first, we got on the right one by about 8:45 and soon found ourselves following a beautiful stream at the bottom of a canyon. This part of the hike was really beautiful, and it was cool and shady by the steam (in contrast with Pasadena, which was easily in the 90s). We saw two more salamanders and a frog, and we actually picked up one of the salamanders (he didn't really bother to try to escape, just squirmed a little; I wonder how these creatures escape from real predators. What eats salamanders, anyway?). He was cute, and his skin was rough, not slimy. And he made up for the rotted baby seal corpse I saw on my beach run yesterday :( :( :( Plus we saw some more deer, and two different kinds of snakes (little ones, so they were pretty, not scary). The trail was supposed to follow the stream to an abandoned gold mine, then loop back up. We found the mine shaft and a few odd remnants of the mine, which looked bizarre in the middle of the forest, but then the trail just ended, and we couldn't find the loop back. In the mean time, my trusty hiking boots, which I have had since eighth grade and are now ten years old, literally disintegrated on my feet. I don't know why, it's been a few years since I've actually worn them, but the rubber seems to have dried out or something. The soles on both shoes were flopping off, making it difficult for me walk without tripping. So I borrowed two hair ties from Jenny (including the one in her hair, thanks Jenny!) and strapped the soles back on. Little bits of rubber continually came off them as I walked.

Having reached the end of the trail, Jenny and I did not really want to just turn around, we wanted to find the loop. So we scampered up this steep slope where the trail ended. This part was actually kind of scary, since the rocks that stuck out looked like proper footholds, but were actually quite loose and came free under your feet. We got to the top and saw what looked like it could be the trail we wanted (in the hot sun, though), but not how to get to the trail. So we sort of surfed back down the hills we just climbed, getting royally dirty in the process. My shoes were NOT happy. At that point, we just gave up and went back the way we came, which wasn't so bad going down, and was just as beautiful. By the time we reached Jenny's car, it was about 1:00, and we were totally exhausted. It would have been a decent little hike without the hillside bushwacking, but that pushed it over the top. I'm already sore. And my shoes, they look like this: 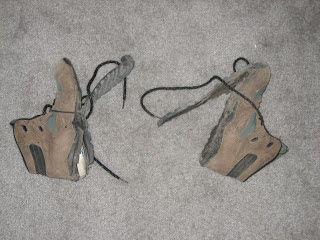 It was all I could do when I got home to scrub myself clean and crawl into bed for a nap. I'm still tired, so goodnight!
Posted by Gabrielle at 11:02 PM