There have been a few interesting links I've come across today. Here they are:
NYTimes article on music for healing
Free downloads from the Concertgebouw, thanks to Alex Ross
Orchestra strife sparks a discussion, via a friend's facebook post
Posted by Gabrielle at 12:51 AM No comments:

I had an RA in college who was from Fargo, ND. He insisted that people from Fargo do not sound the way they do in the movie. I heard an NPR interview of a resident of Fargo talking about sandbagging there to prevent flooding. He sounded exactly like the people in the movie. He even ended the interview with "You betcha!" So, Jeff, I'm sorry, but I have to disagree. 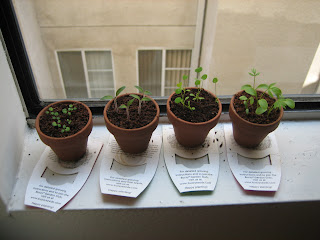 my seedlings! strawberry, tomato, clover, love-in-the-mist (what an awesome name for a flower)
Posted by Gabrielle at 12:05 PM No comments:

I seem to have picked a really excellent time to begin a music career, according to this article. Not that it would a better time for any other career, I suppose. Except maybe a physician. By the way, congrats to all those who matched yesterday!!
Posted by Gabrielle at 10:13 AM No comments:

I was very saddened to hear of the passing of Natasha Richardson today. I do not know her, of course, but still, it made me sad. Maybe it's because she has two young sons, or because she's become familiar to me through her movies. Maybe it's because her family is also famous, so their grief is more personal: when someone dies, I feel bad for their family, but often I don't know anything about their family. But for Natasha Richardson, well, I've seen her sister in movies, and her husband is one of my favorite actors, and I've seen her mother and her aunt and uncle all in movies. I've actually seen Vanessa & Corin Redgrave live at Houston's Alley Theater, in productions of Julius Caesar and Anthony & Cleopatra (she was a killer Cleopatra), when I was only in 7th grade, but I still remember it clearly (she was also a killer Portia: I cringed when she stabbed herself in the leg). And my mom looks a little like Vanessa. I think they made such an impression that from then on I always noticed them and remembered things about them. Anyway, for whatever reason, even though I do not know these people AT ALL, I am sad for them.
Posted by Gabrielle at 9:42 PM No comments:

I really liked this post by Holly Mulcahy, found through Inside the Arts.
Posted by Gabrielle at 12:57 AM No comments:

In honor of St. Patrick's day, I will post this, which I found after viewing the cute video on Inside the Classics.

Posted by Gabrielle at 11:05 AM No comments:

Today I tried to go to the LA Phil to hear Martha Agerich play the Ravel Piano Concerto in G, and Shostakovich 5. There were no student rush tickets and the cheapest available seats were $93. But you could see on the monitors in the lobby that showed the stage and the area behind it that there were plenty of empty seats, at least in the behind-the-stage area. This makes me ANGRY. There were five or so of us student types hoping for tickets, and if they had charged us $15 or $20 they could have made $75-$100 and filled seats. But no, it was $93 or bust. I do not know anything about economics, but to me, this does not make sense. At all. Maybe if I had bought tickets weeks ago I could have gotten some for $40 or so, but seriously, this IS the symphony being elitist, if you ask me. And I always say that it isn't, because you can usually get reasonable seats and ball games will probably cost a lot more. But if you have seats available and you refuse to sell them at an affordable price to people who cannot afford premium seats, well, that's elitist in my book. So FIE, LA Phil, FIE. I really wanted to see that concert, but I really CANNOT afford to pay $93. Sorry.
Posted by Gabrielle at 12:22 AM 2 comments:

Posted using ShareThis
Posted by Gabrielle at 10:10 AM No comments:

I read this article in the NYTimes, and I thought it was cool. It has long bothered me that one of the primary reasons for obesity in this country (in my opinion) is that it is simply so much more expensive to eat healthily.
Posted by Gabrielle at 9:40 AM No comments:

I heard this story on NPR today, and it piqued my curiosity. I don't think anything's wrong with Peter & the Wolf, but this sounds like fun, too.

On a different note, I enjoyed Ein Heldenleben with AYS. But I wish that the low Eflat hadn't stopped in the wrong spot so I had to come back in again audibly. I was really nervous, mainly because I took time off last week and wasn't feeling completely back to shape, but it generally went well besides that. It's a lot of fun to play.

Ironically, I have become hooked on a different hero theme: the TV show, Heroes. Season 1. Several friends warned me via facebook that it all goes downhill from there. Oh well, I will enjoy it while it lasts.
Posted by Gabrielle at 12:47 AM No comments:

i needed a break, so i took one!

Last month I had a bit of a frustrating audition experience. I felt very well prepared for an English horn audition, although when I arrived and found that they were asking both oboe and English horn in the first round, that threw me for a loop a bit. But I said OK, I can do this. I think I played a pretty solid audition. It wasn't spectacular, but it was pretty accurate, and I made no major mistakes. My Brahms Violin Concerto had a bit of an airy tone to start, since I had just come from playing William Tell (who makes people do that on an audition???? That would never EVER happen in real life. And I double on oboe and EH a lot). But other than that, it was a decent audition. And yet I did not advance, despite the fact that people who made many more mistakes than I, still advanced. They always say that your first round has to be so accurate, when here it was not the case. People say these auditions are a crapshoot, and I know this, but when it actually happens that you cannot understand the actions of the committee, it still feels pretty awful. I also had another tough time with summer festival auditions (why do these ALWAYS creep up on me?) and have already gotten some rejections. So I have been taking some time off the oboe, and my friend Kim visited me from Chicago and we had a little spring break celebration. We did some fun LA stuff: the beach, Noshi sushi (yum), Montana Ave and 3rd Streed Promenade in Santa Monica, the Coffee Bean, Upright Citizen's Brigade comedy, Point Dume in Malibu, biking along the beach in Santa Monica, LACMA, Hotel Cafe where we heard The Jane Doe's, and dinner at El Cholo (again, yum). Before I go back to work this weekend with (gulp) Ein Heldenleben, here are some pictures from Point Dume. 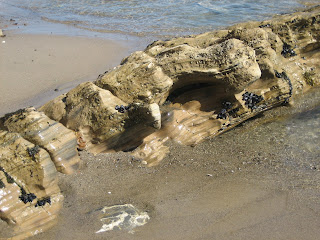 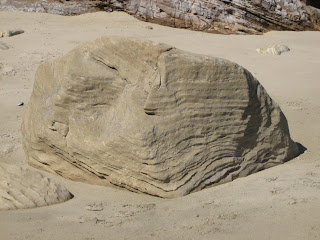 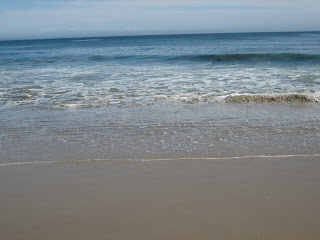 waves on the beach 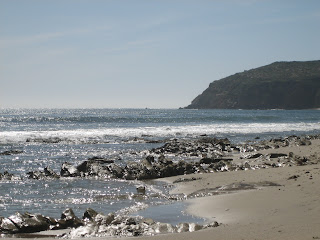 view of the point from the beach 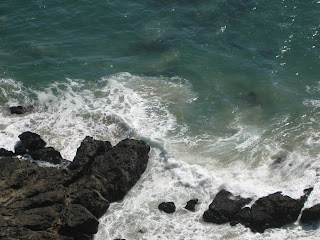 waves crashing below the point moon in the sky 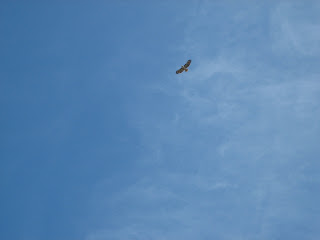 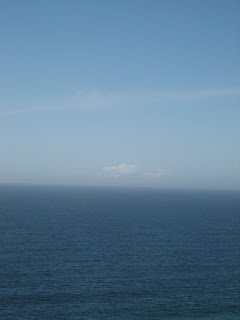 clouds over the Pacifc 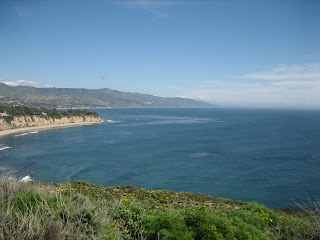 the beach from the point 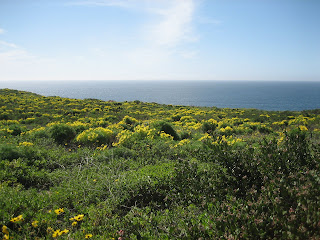 yellow flowers on the point, overlooking the Pacific